Owners of one of the first hybrid cargo vessels ever built hope to develop a shipping route from Connecticut to Long Island, easing truck traffic on congested roadways.

Anyone who has driven on I-95 through Connecticut or on the Long Island Expressway has experienced the heavy traffic and congestion. What if there were a way to reduce delays by diverting cargo and transporting it by boat across the Long Island Sound — a sort of marine highway — instead?

Robert Kunkel, a retired marine engineer, is trying to do just that.

He will soon start a freight ferry service, called Harbor Harvest, which is named for an artisanal grocery store and cafe in Norwalk, Conn., that he has run with his wife, Marilyn, since 2015.

The concept is simple. An environmentally friendly boat will haul locally made products and other cargo between Norwalk and Huntington, N.Y., on Long Island. At both locations, Harbor Harvest warehouses will store the goods and serve as pickup points.

Besides carrying its own freight for resale, Harbor Harvest will also transport goods for other companies, perhaps even small packages.

This service, to begin in a couple of weeks, will be cheaper, quicker and greener than trucking, according to Mr. Kunkel.

“We want to bring back regional waterborne transportation at a reasonable cost to areas that want locally produced food,” said Mr. Kunkel, who also operates a ship design and construction management firm.

The culinary cargo will range from Connecticut beef to Long Island craft beer and wine.

The project is poised to receive $1.8 million in federal grant money. But whether the green effort will be economically viable is another question, said Brent Dibner, president of Dibner Maritime Associates LLC in Brookline, Mass., a marine industry management consulting firm.

“There has been a long trail of good intentions that have fallen on the sword of economic reality,” Mr. Dibner said.

The New York City Economic Development Corporation has also shown interest in the marine highway concept. Its Freight NYC initiative has proposed building a $25 million marine terminal on the East River for suppliers serving the Hunts Point Produce Market in the Bronx, said Andrew Genn, the senior vice president of ports and terminals for the organization.

“We support marine highway investments so far as they can reduce highway congestion in New York City,” Mr. Genn said.

Named Captain Ben Moore, the boat will be able to cross the sound in about 45 minutes, Mr. Kunkel said, adding that it would take a truck at least twice that long to drive between the same points.

A two-member crew will operate the Captain Ben Moore, which is believed to be among the first hybrid cargo vessels built in the United States.The boat’s electric hybrid engine will run on batteries. Shore-side power units, located on piers near each of the Harbor Harvest warehouses, will recharge the boat’s batteries between trips.

Mr. Kunkel said he was committed to running the service for at least 24 months. But he expects it to generate a profit before that. 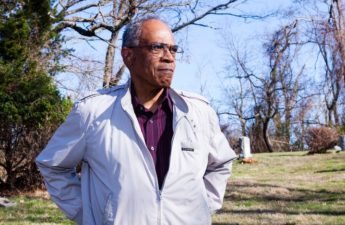 Fighting to Preserve a Chapter of Setauket History